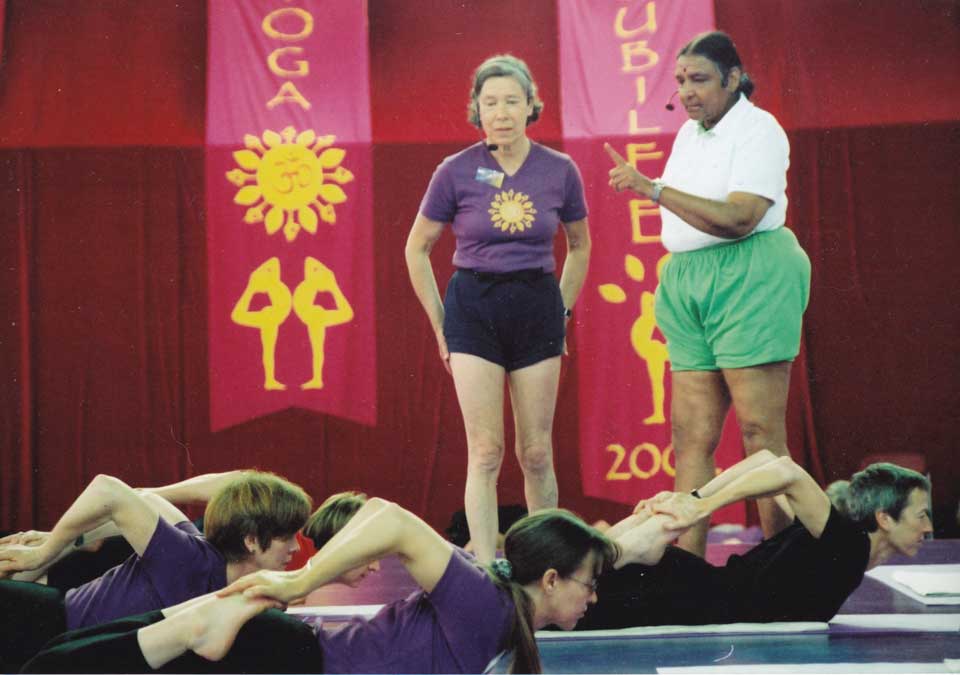 Sallie Sullivan on stage with Geeta Iyengar at the Iyengar yoga Jubilee at Crystal Palace in May, 2002

Sallie started practising Iyengar yoga in 1980. She has been a dozen times to study with the Iyengars in Pune where she has also assisted in the medical classes. She taught the Introductory Teacher Training Course at Maida Vale for 25 years and is an assessment moderator for the UK Iyengar Association.

After learning only from Guruji in the UK, my first experience of classes with Geeta was in Pune in 1992. She was clear, energetic, demanding and quite scary. I adored and respected her in equal parts from the very first class. Her first words to me in that class were prosaic to the point of banal: “Have you been to the toilet?” I had indeed left the class to go, and returned to the hall with dry feet, not knowing I should have washed them. She sent me back feeling like a naughty schoolgirl to wash them. One soon learnt that nothing escaped her penetrating hawk-like gaze. This power was still in evidence in the closing days of the Centenary course when she called students onto stage.

Later that month in 1992 I had a sudden attack of sciatica – I blame the hard Indian mattress. I was early into the hall and settled to do some chair twists. Just before the start of class, I told her my problem. She was abrupt – “chair twists won’t help,” were her only words. Then she began the class with a sequence of leg stretches with specific points that cleared the sciatica on the spot. That was so often the way – a class that was perfect for someone’s specific problem yet at the same time a cracking good class for everyone. And she didn’t look for thanks, in fact sometimes rebuffed it quite roughly.

On one occasion that month, she taught with even more than her usual volume and vigour in the women’s class – she couldn’t bear inattention or failure to practise – then paused. “When I shout, you feel it here!” she declaimed, and with her fist struck herself in the centre of her chest – the heart centre. Right on!

She had a great sense of humour. On one of my times at RIMYI, the women’s class had the job of shifting a whole heap of props for an imminent event. Casting her eyes over us she announced what had to be shifted where – then thoughtfully gave a lighter task to those of us with grey hair. A thought struck her: “And the ones who dye your hair, you decide what to do.”

She rarely learnt names except those of the old-timers and pre-eminent westerners and certainly never knew mine. At Crystal Palace, when I had the chance to teach Bhekasana in front of Geeta, she found fault with my technique and my resulting rock-hard buttocks. Later in the Q&A she gave me help with the same problem in Setu Bandha Sarvangasana. Soon after, I was back in Pune. In the first class, she walked between the rows all in Tadasana, looking at our back view. She stopped right behind me, came round in front to see my face and gave a grunt of recognition. With a mixture of annoyance and amusement, “buttocks like rocks,” she said. Later during that visit, with an open palm she half brushed and half sliced downwards across my buttocks, and at last I got it, a blessing not a slap.

As Abhi, her grandniece, described in her moving tribute at the end of the 13 days of mourning, Gita could be rough in manner, rude even. When they were recording Geeta’s classes, Abhi would try to note the time of any strong outburst, to tell the technicians to delete that part. But sometimes, Abhi said, that would just leave too many gaps. Sometimes she was so loud they could hear her in the family home across the courtyard. Often, although classes always started on time, the pranayama class in particular could overrun by 15 or even 30 minutes. It got to the point that they only gave the start time for pranayama on the timetable, not the ending. Holding back tears, Abhi told us how from now on the Institute would be a quieter and more polite place; they can put the finishing time on the timetable for the Friday pranayama class, and something very precious has been lost.

This article was first published in Dipika, the journal of Iyengar Yoga London, Issue No.51, July 2019.