My story of Iyengar yoga and Multiple Sclerosis 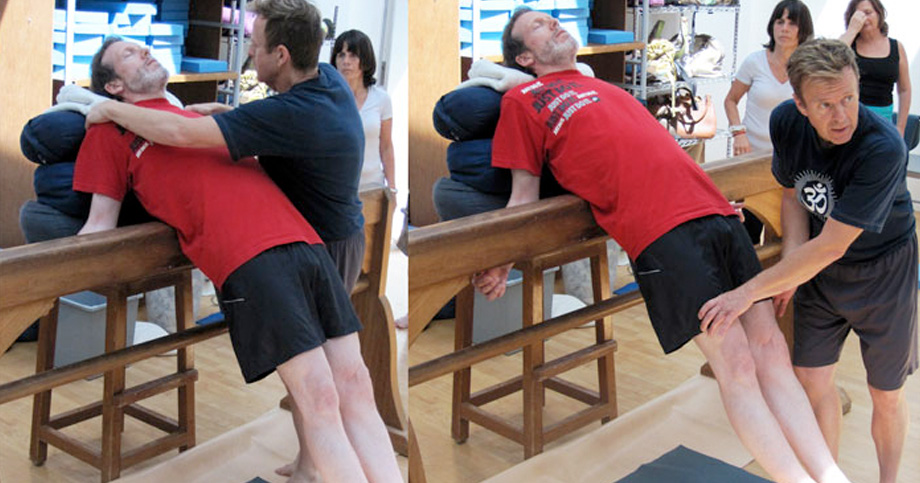 The diagnosis
I have Relapsing Remitting Multiple Sclerosis. The day I was diagnosed I staggered out of the consulting room and said to those with me in fury, ‘I wish it had been a brain tumour! At least with a brain tumour you can have surgery or you die – none of this being slowly eaten away.’  One of those stupid, ill-informed things you say in crisis.

I asked my neurologist what I could do to help myself with diet and exercise. I hadn’t been offered any medication as my symptoms were mild and wanted to know what else I could try. He shrugged and said, ‘You can do those things if you like but they’re unlikely to help. Just go and live your life.’ My symptoms were mild, but the diagnosis had been like a bomb going off in my life. And I was being told that there was nothing I could do to help myself.

Up until that day I had had an objectively successful life. I was an academic high flyer and followed a career in law which I didn’t love but became proficient at and was promoted to partner. I had no experience of being helpless. I was the a doer and solver for other people. I was very good at it.

Finding a way through
For a long while  I adopted a ‘business as usual’ approach and ignored my MS. I couldn’t even bring myself to say the words. I didn’t tell anyone at my new job as I suspected the illness would cause concerns about my performance. I turned out to be right about that. Underneath, I became very depressed. It was my dear aunt, an Iyengar yoga teacher called Dorothy Marlow, who helped me start to climb out of the hole. She reached out to the one place she knew she had always found help and solace – her yoga practice.

She was given the name of Garth McLean, an Iyengar teacher based in LA, who has MS himself. She emailed him and received the kindest response. Garth may not know just how important that response was, but it changed both of our lives. She went to one of his UK workshops and was blown away by his teaching, his story and compassion. A lifebelt had been flung out to us while we were far out at sea.

She encouraged me to start my own yoga practice, knowing I had strong willpower once I latched onto something. I often fought her and yoga, feeling very angry that this had happened to me. What on earth would stretched hamstrings do for a degenerative brain condition? While my anger was a normal reaction to my diagnosis and sense of helplessness, it was also a convenient block to searching deeper and finding some peace with what had happened to me.

“The concept of self-compassion began to dawn on me as I realised that yoga could be a foundation for my life, not another test for me to excel at” 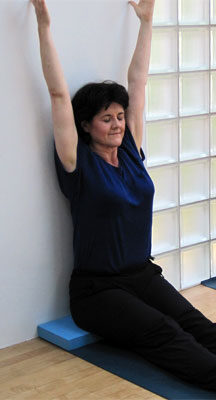 My first workshop with Garth McLean
I first went to Garth’s workshop in 2011 and was terrified of failure. What if my arms couldn’t hold me up, as they were trembling too much for downward dog? What if my legs weren’t strong or I lost my balance in Trikonasana? What if I overheated immediately and had to sit in the shade? As Garth explains, just one degree increase in temperature can exacerbate MS symptoms. What if I just couldn’t do it?

Garth has a simple but profound teaching style. It must come from knowing the challenges of MS from the inside out and years of work to understand how to adapt the asanas to people with very different symptoms and challenges. There are too many adaptations I’ve learnt from Garth to mention here, but some key messages are:

The key message I got from both Garth and my aunt was that I could DO. I could TRY. I wasn’t powerless to help myself. Garth talked this year about yoga ‘vitamins’, one of these being faith. I took this to mean having the faith to practice and better your condition and your life.

What I have learned
The empathy I received from my aunt and from Garth was as important as the asana know-how. It was not overdone – I haven’t met many people with MS who like being pitied – but it was profound. I was as taken aback by that as by Garth’s explanation of his MS being in remission as a result of his daily yoga practice. The concept of self-compassion began to dawn on me as I realised that yoga could be a foundation for my life, not another test for me to excel at. In fact, the less I excelled and the more I found I couldn’t do poses easily, the better it is for me.

A great joy of Garth’s teaching is that he seems to see pretty much at a glance what people are capable of. Even if we might sit there full of lists of what we can’t do, he encourages us to be brave while showing us how to take care of ourselves. His approach is a perfect blend of when to try harder and when to gather strength. That is the mark of a really great teacher and communicator. Last year I managed to go up into handstand for the first time ever with Garth’s help.

I come out of his workshops feeling empowered and able. And being ABLE and more confident in a body which has serious health issues is an indescribable blessing. This is especially so since MS is incurable, at present, and the options presented to patients by the medical establishment are drugs which come with serious side effects. To be shown how to help yourself, when you might feel powerless and despondent, is perhaps the best lesson I’ve taken from Garth’s classes. It gives hope.

At a social level the workshops instill the sense of being surrounded by compassion and empathy from Garth and other teachers who choose to attend and help. There is also a huge sense of camaraderie from being with other people with MS and plenty of laughs along the way.

Acceptance and transformation
I can honestly say that I have MS to thank for many things. If wishing were of any use, I could wish I didn’t have this illness, I’m no masochist, after all. But, I have accepted the ebb and flow of it as a part of me. Although that acceptance is sure to be tested time and time again, MS is not something to do battle with or to conquer. It is just a part of me which, if I make the effort, I can manage reasonably well. On days when I don’t feel strong and am fearful of the future, I can do a yoga practice, which for that time concentrates my mind on what I’m doing on my mat.

My MS diagnosis also gave me the impetus to give up the law. How could I work intelligently in my yoga practice only to return to the world of mad busyness and obsession with targets and profits? Iyengar yoga made that conflict explicit and no longer acceptable to me. I think I am a different person from the harried, sharp-tongued lawyer of years ago.

Mr Iyengar died shortly after I had written this article. I am profoundly grateful to him for bringing Iyengar yoga into my life, firstly through my aunt, who is a yoga teacher, and then through Garth McLean who faithfully spreads the joys of yoga to people with Multiple Sclerosis and other neurological conditions. I must end by thanking the Iyengar yoga Institute at Maida Vale and Sarva in High Wycombe and their teachers, but especially Mr Iyengar, without whom none of this would have been possible.