Amparo Rodriguez on the joys of early morning yoga practice 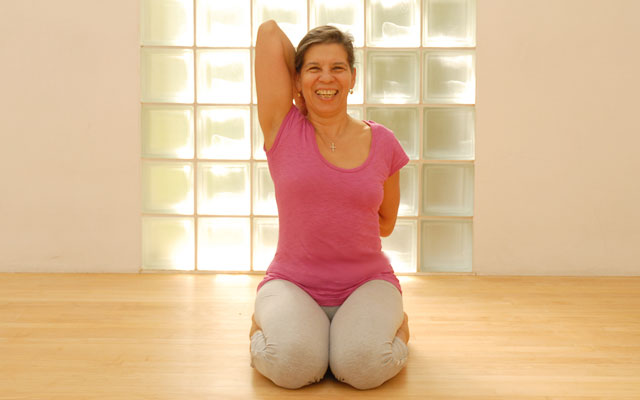 Amparo Rodriguez has been teaching our Wednesday 7.30am  Beginners/General level class at Maida Vale for ten years. Here she shares her perspective on the joys and benefits of early morning yoga practice.

I am an early riser and always have been.  ‘Early to bed, early to rise’ is a proverb I was taught at school and it has stayed with me ever since. Guruji advised that the best time to practise is either early in the morning or later in the day, and I have found that teaching and practising in the morning comes naturally to me.

Seven in the morning is a beautiful time of day, the air is clear, the birds are singing and often in winter time we pause during the class to admire the beauty of the sunrise. In summer, however, a seven o’clock class already feels a bit late and seems to make the day last even longer!

I first started teaching the Wednesday morning class in 2007 and initially it was a challenge to stimulate interest. Sometimes only two or three students would turn up. Nowadays there can be up to 18 students in the class, even during the winter when it feels like the middle of the night!  Over the years I have seen people arriving in all kinds of weather, determined to fit in their yoga practice.

I find this class particularly rewarding to teach because of the students’ dedication.  A few have been coming since the class began in 2007 and many new ones have joined since, including the occasional visitor from overseas.  The level is mixed, sometimes including teacher trainees, and the proportion of men is higher than average.

Those of us who attend regularly feel like a small yoga family, with the added privilege of our access to this special time of day. Mary is always at the Institute before we get there greeting everybody by name and at the end of the class sends us on our way, either to work, to take the children to school, or for a well-deserved breakfast, with some fresh fruit.

There are many reasons to develop a regular yoga routine. But it appears that practising yoga first thing in the morning is one of the best ways to really reap its health benefits.  Many people feel that the brain and body are at their best early in the morning, and with the help of yoga practice they are better able to face the day with equanimity.  Even if the body feels stiff at first, it soon becomes more responsive. Yoga helps to loosen up the muscles in the body while simultaneously increasing energy and improving mental clarity. It is also excellent for reducing stress and anxiety. Some of the students who go to work straight after the class have told me they subsequently feel calmer, more grounded and better able to make decisions during the day.

Another advantage to a morning practice is being able to co-ordinate your yoga with meals. Most of us know that ideally yoga should  be practised on an empty stomach and this can be difficult to achieve during the day. In Light on Yoga Guruji advises that ‘asanas may be practised without discomfort one hour after a very light meal, allowing at least 4 hours to elapse after a heavy meal before starting the practice. Practising in the morning makes this recommendation much easier to follow, however students who find it difficult should have a cup of tea, coffee, cocoa or milk before the early practice’.  Students who suffer from low blood pressure and anaemia should have a small snack to prevent dizziness.

Establishing a routine of early morning yoga practice also helps the body to regulate its sleeping habits. In time the body will become used to waking up and receiving an immediate boost of energy from yoga asanas, which makes the act of getting out of bed that much easier!

Join Amparo’s Drop-in class at 7.30-9.00am every Wednesday for a great start to the day.

An interview with Richard Agar Ward

Yoga and the creative arts