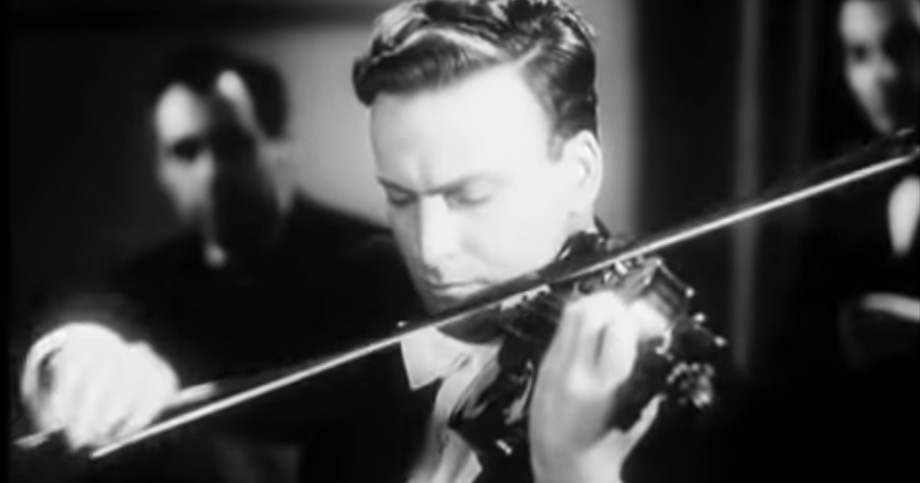 Rarely has there been a more unusual friendship than that between Jewish-American virtuoso violinist Yehudi Menuhin and BKS Iyengar. When they first met, Menuhin was 36 years old and had developed from a child prodigy in his native New York to an internationally recognised musical talent. BKS Iyengar was 34 and, after a gruelling apprecticeship with his brother-in-law and guru Sri Tirumalai Krishnamarharya in Mysore, had established himself as a highly respected teacher in Pune but was yet to travel outside of India. Both masters in their chosen fields, their enduring 50 year friendship was transformative for each of them.

Yehudi Menuhin performing Mendelssohn violin concerto filmed in Charlie Chaplin’s studios in Hollywood in 1947 and conducted by Antal Dorati with the Hollywood Symphonic Orchestra formed especially for the occasion.

A chance encounter
On a visit to his osteopath Menuhin spotted a book about yoga in the waiting room and was intrigued by the subject. He was in India a year later, in 1952 as a guest of Pandit Jawaharlal Nehru, India’s first Prime Minister, when he mentioned the book and was introduced to BKS Iyengar. Their first meeting was intended to be brief but turned into a three and a half hour session. Menuhin described  the trouble he was having sleeping and his feeling of constant fatigue to Iyengar who put him in Savasana and had him dozing away in a few minutes. The violinist felt the physical  benefits of yoga from that first meeting and the close friendship between the two men developed over decades lasting until Menuhin’s death in 1999.

After Menuhin returned to Europe he and Iyengar wrote to each other regularly. The violinist became a serious yoga student, and in 1982, even famously conducted the opening of Beethoven’s Fifth Symphony standing on his head while giving directions to the orchestra with his feet. Iyengar prescribed Menuhin sequences of postures to help manage his muscular pains which disappeared completely. When mentoring young musicians Menuhin would advise them to incorporate yoga postures into their routine. Today yoga classes are still offered to the young musicians at the Yehudi Menuhin School.

Iyengar’s first trip to Europe
With his busy schedule Menuhin could not travel to India for yoga tuition so in 1954 he invited Iyengar to travel to Europe to stay with him and teach him yoga.  Iyengar accepted Menuhin’s invitation and made his first visit to Europe. With Menuhin’s  encouragement, Iyengar began his lifelong efforts to introduce people outside India to the ancient art and science of yoga. It was at the end of that first trip that Menuhin gave his yoga teacher a watch with an inscription on the back, “To my best violin teacher, BKS Iyengar“.

The images of Yehudi Menuhin and BKS Iyengar above are reproduced courtesy of the Menuhin Center Saanen.